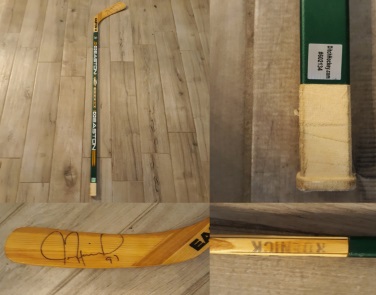 Item #602134 - Autographed green Easton Bubble F-100 hockey stick was game used by future Hall of Famer Jeremy Roenick while playing for the Phoenix Coyotes. The Chicago Blackhawks selected Roenick with the 8th overall selection in the 1988 NHL Entry Draft. Jeremy began his career with the Hawks in 1988-89 and spent 8 seasons dazzling the fans of Chicago. During that span Roenick was twice a 50-goal scorer, helped lead his team to the Stanley Cup Finals in 1991 and made 4 NHL All Star games. In 1996-97 Roenick joined the Phoenix Coyotes where he spent the next 5 years of his career. J.R. would go onto play in Philadelphia, Los Angeles, back to Phoenix for a second time and then spent two final seasons in San Jose before announcing his retirement following the 2008-09 season. In a career that spanned 1363 games over the course of 20 seasons, Roenick tabbed 513 goals, 703 assists and 1216 points. This two-time 50-goal man played in 9 NHL All Star games during his illustrious career. On the international stage he represented Team USA in the 1991 Canada Cup as well as the 1998 and 2002 Olympics. Jeremy is one of the highest born American goal scorers in the history of the sport and is a member of the US Hockey Hall of Fame. A spot in the Hockey Hall of Fame no doubt awaits this valiant warrior. This green Easton hockey stick is fully taped on the butt and blade. Jeremy has autographed the heel. The stick is uncracked and in beautiful condition.