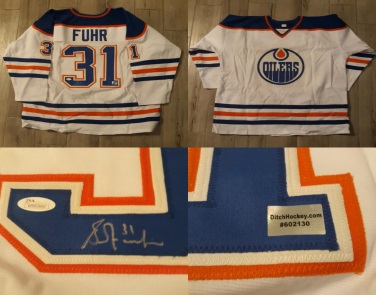 Item #602130 - Grant Fuhr - Autographed Jersey. Grant Scott Fuhr (born September 28, 1962) is a Canadian former ice hockey goaltender in the National Hockey League and former goaltending coach for the Arizona Coyotes. In 2003, he was inducted into the Hockey Hall of Fame. He is best remembered for a decade of stellar play for the Edmonton Oilers in the 1980s. He won a total of five Stanley Cups and was a six time All-Star. In 2017 Fuhr was named one of the '100 Greatest NHL Players' in history.[1][2] He set a number of firsts for black hockey players in the NHL, including being the first to win the Stanley Cup and being the first inducted into the Hockey Hall of Fame. Wayne Gretzky has said on many occasions that he believes Fuhr is the greatest goaltender in NHL history.