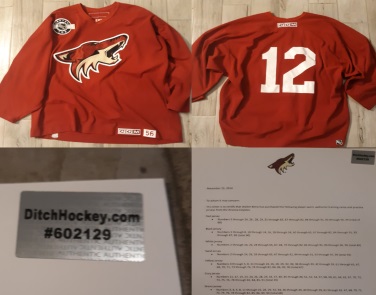 Item #602129 - This is a worn red Phoenix Coyotes practice jersey that was made for the team to wear in preseason camp from 2003 before they switched to a new style in 2014. Only one numbered jersey was made in each color. The team switches to unnumbered practice jerseys once the season starts. This #12 jersey was worn by enforcer Paul Bissonnette who played for the Coyotes from 2009-14. He is rejoining the Coyotes as a radio analyst for the 2017-18 season. Bissonnette was wearing this jersey when he got into a on-ice fight with teammate Mark Louis during training camp in 2013. This is video of that fight chick HERE . Everything is sewn on this size 56 CCM jersey which has a fight strap and also shows wear in the sleeves. These jerseys were made of heavier material than recent years and the Coyotes head logo is slightly larger. Obtained directly from the Coyotes and comes with a copy of the team LOA.