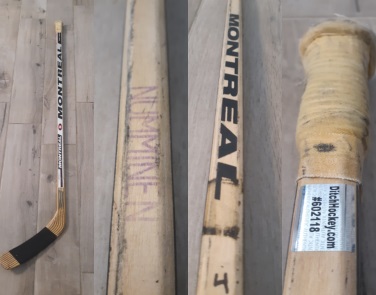 Item #602118 - Teppo Numminen game used stick - This is a game-used and unbroken stick of Phoenix Coyotes defenseman Teppo Numminen from the 2001-02 or 2002-03 NHL seasons when he was the team's captain and used these Montreal wood sticks with silver and red graphics. This one shows moderate overall use and NUMMINEN stamping on the upper shaft in gray. All original tape on the knob and blade. Teppo owned the Montreal hockey company at that time in his native Finland. He played for the Winnpeg/Phoenix franchise from 1988-2003, served as captain from 2001-03 and the Coyotes retired his #27 in January 2010.