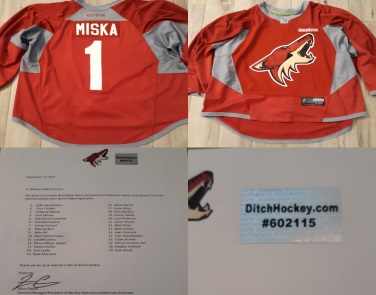 Item #602115 - This is a worn Red Hunter Miska #1 Arizona Coyotes practice jersey that was worn at the June 2017 rookie development camp in Scottsdale and Peoria,AZ. Miska was signed to a contract by the Coyotes in April 2017 after leading Minnesota-Duluth to the NCAA championship game as a freshman. This Reebok jersey is a size 58K goalie cut and shows moderate overall use. The Coyotes sewed names on the backs of the jerseys for the 2017 rookie camps, mainly because the NHL is making every team switch to a new jersey manufacturer. Coyotes players normally only get one numbered jersey in various colors in training camp and they switch to unnumbered jerseys once the season starts. Goalies seldom wear numbered practice jerseys but they did at the June 2017 camp. Miska (born July 7, 1995) is an American professional ice hockey goaltender for the Tucson Roadrunners of the American Hockey League (AHL) as a prospect for the Arizona Coyotes of the National Hockey League (NHL). During the 2018–19 season, Miska made his NHL debut with the Coyotes in relief of Darcy Kuemper in a game against the Detroit Red Wings on November 13, 2018.[5] On November 23, Miska was returned to the Roadrunners.
in partnership with @Coyotes.Central - Instagram