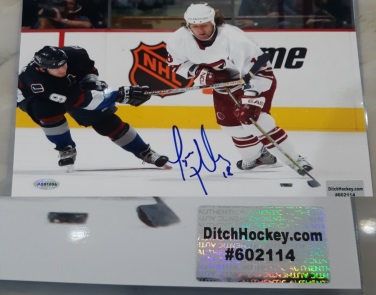 Item #602114 - Autographed Tyson Nash 8x10 Photo. Authentication sticker located on bottom Right of the photo. Nash spent his first five seasons in the NHL with the St. Louis Blues, In his Early Years, in the role of a pest, specializing in drawing penalties from members of opposing teams. He spent the next two seasons with the Phoenix Coyotes. He was traded to the Toronto Maple Leafs from the Coyotes for Mikael Tellqvist and a 4th round draft pick on November 28, 2006. On November 22, 2007, he signed with the Nippon Paper Cranes in Japan. The Cranes finished the season in second place, behind the Oji Eagles. He played his junior career with the Kamloops Blazers where he was part of the team which won three Memorial Cups. He is one of only three players to have won three Memorial Cups with the same team (Ryan Huska and Darcy Tucker are the others). Nash was hired as the Phoenix Coyotes' TV analyst alongside Matt McConnell following his retirement.